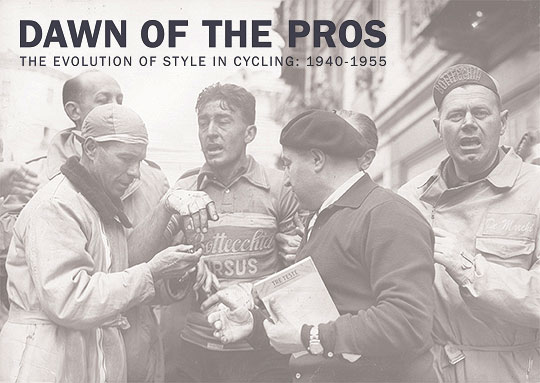 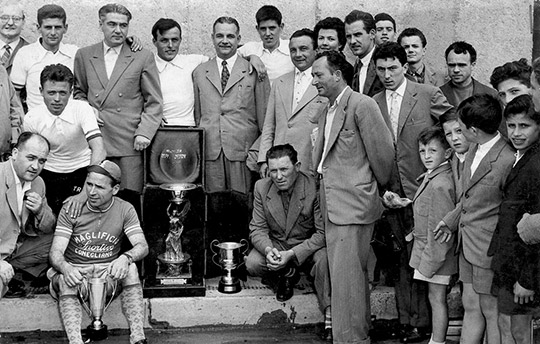 Born at the turn of the twentieth century, Emilio De Marchi was a friend of cycling pros such as Ottavio Bottecchia, Fausto Coppi, Giordano Cottur and a list of others including later legends like Basso and Moser. De Marchi’s career began as a bike and motorcycle mechanic, where he eventually became actively involved in some of the first cycling teams ever created. “At that time, quality cycling apparel was hard to come by, so Emilio [through his wife Emma] solicited by many fellow cyclists, started a small homemade production of cycling clothes and actively contributed to the definition of a cycling-specific [garment] standard as opposed to more generic ‘sports’ clothes that were more easily available back in the day.”

To commemorate this legacy, the De Marchi Company has recently assembled Dawn of The Pros, The Evolution of Style in Cycling (1940-1955). This beautiful hardcover book (printed in Italy!) is overflowing with images from this exciting era. De Marchi was there during the early years of cycling and is responsible for the design of some iconic garments such as the Italia track suit and the current jersey design that allows cyclists to breathe freely without the restraints of the rigid collars that were common in sportswear at the time.

I’m sure most readers of this blog could agree that for the past few decades, road cycling has eluded the concept of good style, and we generally equate functional cycling kits with sun-faded spandex covered in excessive logos like some kind of Nascar skin-suit, adorned with mostly unreadable pseudo-sponsorships from banks, car companies, and for some reason, chili peppers. However, this is not always the case. Brands like De Marchi have been quietly producing thoughtful and classic apparel designs that keep cyclists looking sharp as a tack. This is what their heritage is all about. Check out the book at demarchi.com